A theater performance by the deaf-mutes: Clint, Rival and Viktor, plus Maya.

Hence the latest inspiration the Noken brought about from the Noken in Tabi: for indigenous peoples and local communities, us, to get together, be connected to each other, and to take action now and to not wait for someone else to step up. We found who we truly are and use it to make the change.

In Isyo Hill, Rhepang Muaif, on 17 March 2021, nokenners celebrated the Day of Awakening of the Indigenous Peoples of the Archipelago. It was a night started by AMAN’s marching song, followed by rousing speeches (i.e. Abdon) and emotional testimonies, of singing and poetry and dancing, and a theater performance by the deaf-mutes: Clint, Rival and Viktor, plus Maya.

You can watch the 4 minutes video here:
https://www.icloud.com/iclouddrive/0oox2DDwt8qKvRAt_FoUnUniA#Cendrawasih_by_the_mutes

The celebration ended at exactly 10 pm by the order of Pak Alex. He declared that everybody should immediately go to bed because at 05.00 in the morning everybody should wake up, march into the forest, and watch Cendrawasih, the bird of paradise. We did as ordered and we did see the magnificent birds. Awesome.

For me personally, this episode in Rhepang Muaif is a perfect “If not us, who? If not now, when?” In everything, be it the struggle to gain recognition and protection of the 98 thousand hectares of indigenous territory of Rhepang Muaif, cleaning up trash and stop littering, or the fight to save the birds of paradise, the who and the when to act is very clear: ourselves, right now. The communities themselves, together.

In Yotoro Hill the youth of Kwadeware made a vow to clean up the hill from trash, and to be firm to themselves and everybody to not litter. That spirit spread around like a virus. So, one of the youth, student Geissler shared how the days of nokening changed him. He said that during the first few days of nokening he was just afraid that he will be ashamed if found throwing cigarette buds around. So he just hide it somewhere. But after the many days together, toward the end of noken, he now feels that it’s just the right thing to not litter. And it’s just natural that he kept his cigarette buds with him going here and there.

Well done Geissler!
Well done all of you young people!

(Actually, it happened to me too. It made life a bit more difficult but hey…“make a change”).
That evening too, Ezra of Hiroshi shared his anger about the Holtekang in Jayapura. The unchecked land grabbing and development has trashed the coastline of Holtekang. The destruction brought down fishery, the economic, culture and social of the indigenous community, including The Woman Forest.

If you want to see a horror picture of trashed Holtekang and Guld of Youtefa, and the Red Bridge lurking behind, check this out: https://www.icloud.com/iclouddrive/0e4fr0KZNWUmLOL4aX3y4-YUg#Holtekang

With the change, with the new awareness even anger, as a matter of course, on the day we visited the community hall in Yokiwa Kampong, we did what is now a most natural thing to do: make a line and pick up trash.

On saving Cendrawasih: here’s a harsh criticism by Iqbal of Rumah Bakau Jayapura:
How come everybody in Indonesia (i.e. Jakarta, Java, Sumatera, Kalimantan, Sulawesi, national newspapers) protests when an elephant in Sumatera or orang utan in Kalimantan dies but nobody protests when a cendrawasih is killed, abused, robbed of its crown feathers to be then used as a ceremonial prop, which is basically a joke, to crown a Jakarta political figure as anak adat, for example?

Obviously, it is the Papuans themselves that have to protest and stop the killing of cendrawasih, can’t rely on the rest (of Indonesia). And, they have to act now before it’s too late, before there is no more bird of paradise in the land of paradise, Papua.
Anyway, at that 5 a.m., in the comfort of sleep in Isho Hill, I said to myself:

Pak Alex would simply go and lead the group into the forest with or without me. And that would be how I become the one who lost a Cendrawasih moment.

Noken: from Papua for Nusantara

Sun Mar 28 , 2021
#menoken in Tabi, Jayapura (A Bahasa Indonesia version of this writing is published in Cendrawasih Post, 18 March 2021, by Mathius Awoitauw, Bupati of Jayapura) Since around a decade ago Jogjaners like to proclaim “from Jogja for Indonesia”. This gift from Jogja is the inspiration and spirit of tolerance in […] 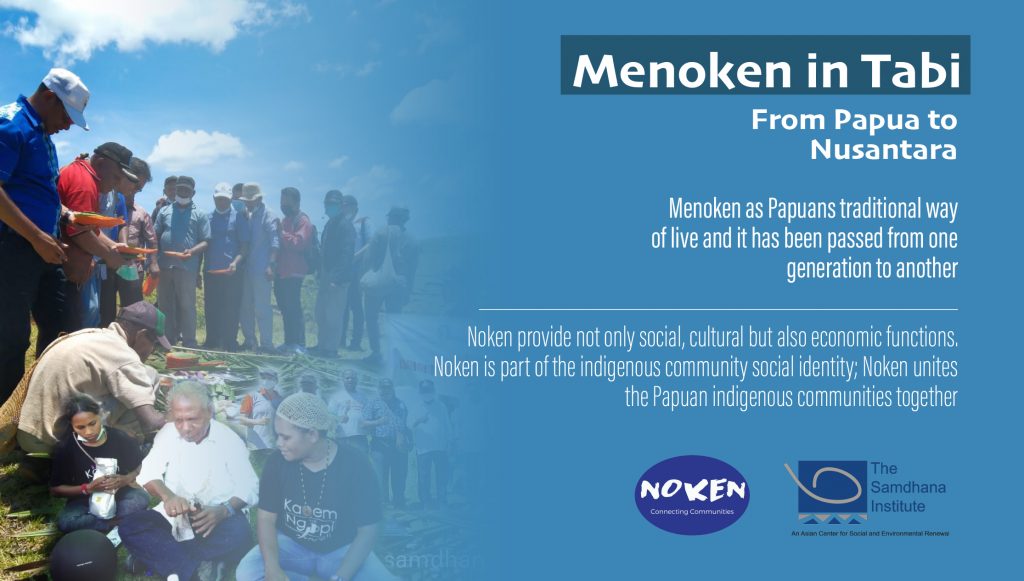