Queen is my favourite band. Bohemian Rhapsody, Love of My Life, Radio Ga Ga, Spread Your Wings, and many more…174 or so songs in total. I like them all.

I found out that Queen is also the name of the youngest member of the Menoken Domberai. She is 1 year old and part of the family of Sance, Ecclesia, Abigail. I like them all.

This is a complete noken family. The mother and daughters and a dog took part through the whole Menoken Domberai, 25 September to 1 October 2021. We nokened in Fait Hill- Sorong City, Wehali-Maybrat, Teminabuan and Ha Ha-South Sorong, and Kompipa and David Womsiwor in Sorong District.

If I were a dog, I want to be like Queen.

Like Queen, I would enjoy so much that ride with motorbike across the City of Sorong. Sance drives, EQ and Abi at the back, I would be a queen in that space under the handlebars, protected by the legshield and inner fender. Of course it would have been absolutely regal ifI could put my head up and out for all to see, posing like a queen on a horse-drawn carriage I once saw on TV, high above looking down at my subjects. Alas, I can’t stand the wind blowing on my ears. I have a most delicate and touchy ears, you know.

Anyway, I would enjoy the street view from home, which is at km 13 Sorong as I often heard them humans said, a home that is really home for me and my humans, Sance-EQ-Abi; they are my humans, not the other way around where humans are always being misled to think that we are their dogs; a home where I could sneak out to those little seedlings and various plants plot, so meticulously tended by my human Sance and her friends, for a little napping leisure, or to venture a bit further down the lawn where there is that little pond with those pathetic fish taking up Sance’s baits. Fish is so stupid, dogs are smart. That’s why humans do fishing but not dogging.
Bummer, I am talking gibberish. Where was I?

O ya..I was riding motorbike from home to Fait Hill which is right in the heart of Sorong City.

Now…this is where I would realize that sometimes my humans and their friends, who call themselves nokener, do have a bit more complex psychology than us dogs. A bit wilder, a little crazier. I know a lot about being wild and crazy as I often suspect that I am a reincarnation of the Zanzibar-born Englishman who was the lead vocalist of a band of my namesake, who liked cats, which is perhaps why I always feel friendly to cats too. Freddie is the name. Wild and crazy was his game. So, I recognized wilderness and craziness the moment I observed my humans and their nokener friends.

Camping in Fait Hill? I am not complaining about the fact that we had to sleep in a tent. Mind you, I am young and I use only small space to sleep. But surely three humans and a dog would be too much for that tent for two, don’t you agree? And they moved a lot when they’re sleeping, bumping an arm to my nose, or a leg on my ear.

As a possible reincarnation of Freddie I understand craziness. How crazy those humans do you think when instead of sleeping in their beds at home nicely warmly and dryly they spent those two nights at the Fait Hill, cold and wet under the pouring rain.

Even I was almost got into deep trouble when someone forgot to dismiss me from guarding duty at that post under a small tree. They were so deep in whatever they’re doing which involved a lot of laughter, someone’s singing, a lot of coffee and, I won’t recommend this, some brown and murky liquid that smells sugary, and a lot of strange words too. I think they were playing some newfound games too with eyes closing, ears exercising, and arms-legs coordinating. Soo boring. I can do whatever they’re doing, finding whatever they’re looking for just with the power of my nose and superb smelling.

I knew all along how crazy my Sance is. She taught at a university, but she also worked with many little humans from the streets that usually are where my own kinds roam around freely. Matter factly, those streets are our territory. Hmmmm…and humans called us street dogs!!! How so untrue.

She also spend so much time with her fellow female humans. Humans called it organizing women. And they talk and write and make stuffs and basically make a lot of noises. In addition to all that she’s also collecting seedlings, planting trees, meeting all kinds of humans, writing a lot on bundles of used paper (many are leftover from my creative sessions or exercises), and adopting me, which of course I am perfectly happy with.

I am also happy with my EQ. She’s the calm and composed one, which must have been a trait of being a sixth grader. Her sister, my Abi, a fourth grader, is more loud and mobile. Being a dog I have to always put her under my watch, keeping her from harm. How I wish she will develop her nose power so she can smell well and be smart like me…

Talking about smell, I’ve also found that one of them, a human nokener, could really cook. My highly developed capacity nose found her worked on those delicious fish from the ocean, turned them up and down, put them on fire and had me served the best fish I’ve ever had in my entire life, as a dog that is, not sure about Freddie’s. I heard that she plays a lot with different ways of cooking and baking and cookie making, including a toki-toki sambal which apparently involves a lot of punching chillies inside a bottle, and a lontar pie that is the first of a kind and smelled very juicy, coconutty, richly. I hadn’t eaten that lontar pie myself, pity me, so one way or another I will grab that, steal if I must, and taste that pie.

It’s weird but I knew that Eche, the name of that female human, also plays a lot with street little humans and big female humans too. She writes too, a poem here, a song there. But Eche is very much into crafting, she makes and works with other female humans who are making noken, bags, and various tools and crafts. None of those handcrafts suited me, though, unfortunately.

I think both my human Sance and Eche are wild and crazy, almost like my reincarnatee, Freddie.

And then there is Maria. She and her young humans community in that kampong pioneered the Fait Hill park. It’s an exemplary dog-friendly park with lots of space for us to roam and bark around, to enjoy the scent of eucalyptus trees, to smell the morning dew on wet grass, that special aroma of coffee, and banana being fried, and fish being grilled. It’s a completely sanguine sanctuary out of the messy and dusty streets of Sorong City.

The humans, totally not surprisingly, had their complains about Fait Hill. Humans always complain about things. They need a special, dedicated facility to poo and pee and other thing needing water. They’re so difficult compared to us who are by nature just go to the nature for all that. When nature calls, we simply answer the call and do it in the nature.

But I heard recently that those humans in Fait Hill: Maria, Wilson, Marta, Filly, Yanti, Denias have solved this humanistic problem, once and for all. I don’t know how they did it by they were working madly right away after our noken there, and have built a toilet and brought water up to that hill. Perhaps it’s because the ideas they throw about during all those time around the fire, and a little bit of donation from their fellow nokener. Well, good for them, humans.

In addition to solving that nature calls problem, I also heard that those humans of Fait Hill have also planted more trees in and around the hill. They even started to build a tree nursery there.

From Fait Hill I travelled with my humans and their human nokener friends to Wehali in Maybrat.

It’s a long and hard travel, especially for humans. It’s not too bad for me because I sat and slept on the car floor, down there where the center of gravity is low, thus less pitching and yawning and rolling. It’s so unfortunate for my humans and other humans who had to contend themselves to the seats and endure hours of bumpy and bouncy ride in that small seven seater car.

But we arrived there in that kampong nonetheless. The first thing I noticed was that there’s even stronger smell of grass, and burning wood emanating from a shack where humans cook. We got there late in the night and the air was so crisp, the sky was so big, blue and wide.

I smelled something else too: another dog. He seemed happy to see me. The excitement of meeting a queen, I guess. I nokened with him, sharing stories of the big world out of his kampong, the joy of riding motorbike, the aroma of coffee from the mountain and fish from the sea, the playing in the streets and hill of Sorong City.

In addition to the now familiar to me sitting around fire and chatting endlessly, including a ritual of giving where the little old man of Wehali received a pack of coffee beans, as it turned out that he is a big fan of real coffee, having his son gave him a grinder some years ago but he’s been for a long time out of coffee to grind, the human nokenners planted coffee in the little old man’s land. One coffee tree to be exact, just for a show, out of 600 seedlings they took from my human Sance’s house. The plan is to plant in 2 hectares of land. I heard that those seedlings first need to acclimatize after the long travel from Sorong City. Apparently they’re more delicate and sensitive to strong blowing wind than my ears are.

That morning, the humans took dives and swam in Doros River in that kampong. I did not. The water is too clear and cold, the current is too strong for my taste. That and the fact that I actually had never swam in any river, or pond, or sea, ever.

Sandika, a human nokener, posing with a crown that is supposed to be for a queen, at Doros River, Maybrat.

But hey… I did swam for the first time in my life during this Menoken Domberai. It’s not in Wehali, though, but the other river. I will tell you all about that awesome experience in the next story. 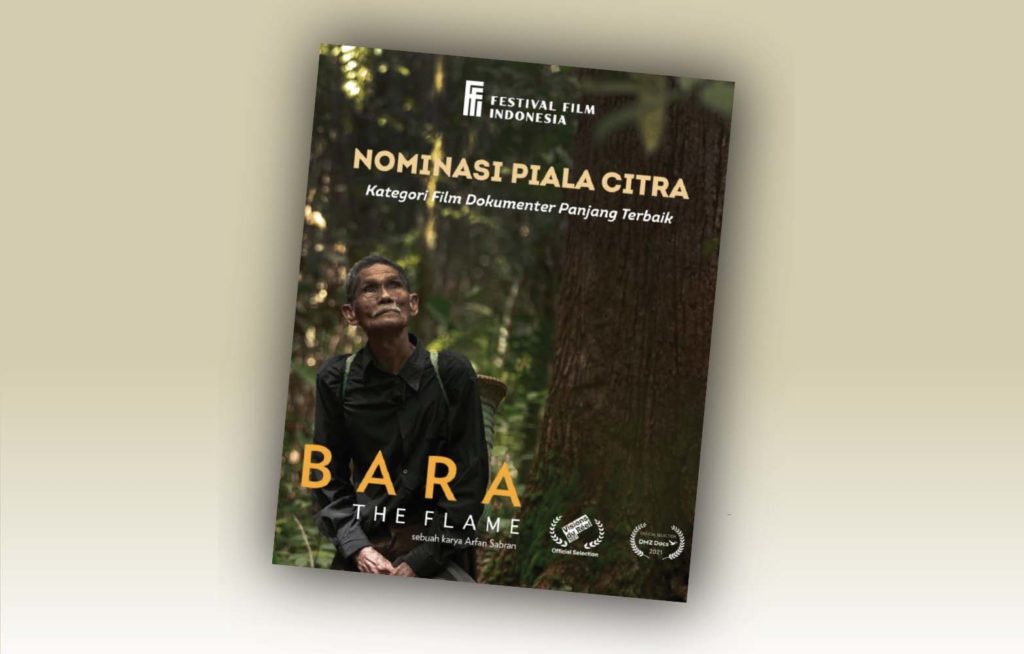